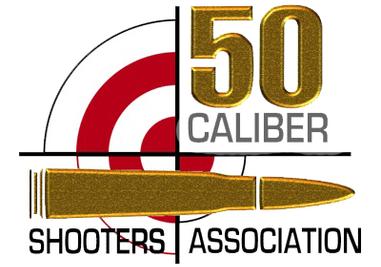 ARTICLE I
NAME AND OBJECTIVES

1. NAME: The name of the organization shall be known as the Fifty Caliber Shooter’s Association, Inc. (FCSA)


3. PRINCIPALS: The association is an incorporated non-profit organization founded and united by persons with mutual interests and acting in the spirit of cooperation to best promote their special interests and enjoyment.


4. HEADQUARTERS: The mailing address for the headquarters of this association shall be P.O. Box 111 Monroe, Utah 84754-0111 until changed at the direction of the President with the approval of a majority of the Board of Directors.


5. PUBLICATIONS: The official publication of the Fifty Caliber Shooter’s Association, Inc. (FCSA) shall be a periodical newsletter published four times a year or quarterly. The newsletter will be entitled Very High Power.


6. LOGO: The official logo of FCSA shall be the following design:

The FCSA shall govern the use of the logo.

1. MEMBERSHIP: The membership of the Fifty Caliber Shooter’s Association, Inc., is comprised of individuals as established by these By Laws.


2. There shall be three (3) classes of membership in the FCSA; member, associate members and affiliated organizations.


3. Members are those persons whose membership is paid and current. Members are encouraged to be current members of The National Rifle Association and shall be required to pay fees established by FCSA for participation in competitive shooting matches.


4. Associate members are spouses and children up to the age of eighteen (18) years who reside with the member, or members of the military service on active duty.


6. Membership in FCSA shall not be restricted to any person or persons based on race, religion, sex, or political affiliation.

1. All organizations must hold an Affiliated Membership in order to host a sanctioned FCSA match.
Life memberships may be purchased at any age but a discount will be offered after sixty five (65) years of age.


2. Membership in FCSA as a member, established by payment of annual dues shall entitle each member to a one (1) year subscription, or four (4) issues of Very High Power, the FCSA periodical newsletter and to be eligible to compete in all FCSA sponsored shooting competitions. Members shall be eligible to hold elected office and vote on any matter before the membership, except for those items concerning the shooters only. All rule changes concerning the shooting matches can only be voted upon be those who shoot.


3. Membership in FCSA as an associate member, established by the payment of dues shall entitle associate members to participate in all FCSA shooting competitions, hold elected office and vote on any matter before the voting membership, but do not receive the quarterly VHP magazine.


4. The Board of Directors shall determine the amount of dues payable for each class of membership and the duration in time for each class. Special discounts will be made available to active duty members of the military.


5. Any member of FCSA who has received four (4) issues of Very High Power and has not paid a renewal of dues is in arrears and will be dropped from the mailing list by the Secretary/Treasurer. For purposes of match participation and voting, the member’s expiration date will determine eligibility.


1. The membership meeting shall, when in session, possess the power to amend these By Laws, elect officers and provide direction to the Board of Directors.


2. Subject to the authority of the membership meeting, the activities and affairs of FCSA shall be governed and all corporate powers exercised by the President under the direction of the Board of Directors.


5. The Executive Board shall have no power to adopt, amend or suspend these By Laws or the direction of the Board of Directors.


6. Except as may be restricted by these By Laws, all members shall have the right to examine the records, accounting books, reports, and the minutes of the Board of Directors upon reasonable written and timely request at a place and time specified by the President or the Executive Board.


ARTICLE V
OFFICERS, BOARD OF DIRECTORS, EXECUTIVE BOARD


2. The Board of Directors shall be comprised of the President, Vice President, Immediate Past President, the Secretary/Treasurer, the Editor, and eight (8) elected Directors at Large.


5. For the purpose of daily administration, the matters of business of the FCSA shall be governed and directed by the Executive Board.


1. The membership meeting shall be convened by the President at least once annually in conjunction with the "World Competition".


2. Written notice of the time and location of the membership meeting, applications for nomination to elected office and applications for recommended By Law changes shall be given to all members of FCSA in a copy of the newsletter Very High Power that precedes the "World Competition".


3. A quorum shall consist of the members present at the membership meeting.


4. All members and associate members are eligible to attend membership meetings.


5. Only members and associate members shall have the right to vote at the membership meeting.


6. Meetings of the Board of Directors shall be called for and presided over by the President and in his absence the Vice President.


7. Where practical, the location and time of all Board of Directors meetings will be published in advance in the newsletter Very High Power.


4. The Treasurer shall be the chief financial officer of FCSA. He will be responsible for ensuring compliance with the fiscal policies of FCSA, these By Laws and the Board of Directors. The Treasurer shall provide an annual financial statement of FCSA in the newsletter Very High Power that is published just before the "World Competition" each year.


5. A Director at Large shall perform the duties of a member of the Board of Directors, including duties as a member of any committee upon which he may be appointed to serve, in good faith and in a manner he believes to be in the best interest of FCSA. He will conduct himself with such care, including reasonable inquiry, as an ordinary prudent person in a like position would use under similar circumstances.


6. No officer, member of the Board of Directors or appointed member of a committee shall vote on any question before his committee or board in which they have a direct personal interest not common to other members of FCSA.

1. Only individuals who are members of FCSA are eligible to hold elected office or positions appointed by the President.


3. Nominations for President, Vice President and Directors at Large shall be submitted to the Secretary/Treasurer of FCSA by members and associate members of FCSA. Nominations must be received at FCSA in writing in a timely fashion prior to the publication of the issue of the FCSA newsletter Very High Power that precedes the election each year. Letters from those persons nominated indicating their willingness to accept the nomination must also be received at FCSA prior to the publication of the Very High Power newsletter before elections are held. Letters of acceptance or position statements by the candidates can be published in the issue of Very High Power preceding the election.


4. Nominees for any elected position within FCSA must include at least two (2) of the following ways they may be contacted by the membership of FCSA if they are elected. Home address, phone number at home, phone number at work, fax number or email address. The selected methods of contact shall be printed in each issue of the Very High Power magazine during their term of office if they are elected.


5. The elections will be conducted with each FCSA member receiving a ballot by mail from the Secretary/Treasurer listing all candidates for prospective positions. Members will vote for the candidates of their choice and return their ballots back to FCSA by mail for tabulation. The results of the election process will be announced at the membership meeting held in conjunction with the "World Competition".


6. All members and associate members of FCSA are eligible to vote in FCSA elections of officers, Directors at Large, proposed By Law changes and proposed Match Rules changes.


7. All newly elected Officers and Directors at Large shall take office at the close of the annual membership meeting.


8. Vacancies in any elected position can be filled within forty-five (45) days of the vacancy. A vacancy of the position of President shall be filled immediately by the Vice President. All other positions can be filled by appointment by the President.


9. Any officer or Director at Large may be reprimanded or removed from his position for any act that has been determined to be detrimental to FCSA by the Board of Directors, in the following manner.


A. A petition requesting a confidential investigation, signed by one third (1/3) of the members of the Board of Directors, shall be filed with the Secretary/ Treasurer or the Vice President if the Secretary/Treasurer is the person accused.

1. The President shall appoint five members of the FCSA to serve as chairman of five Standing Committees. Each chairman shall serve a one (1) year term, at the pleasure of the President, of the following committees:


2. The FCSA By Laws Chairman will be the person of contact for members of FCSA to submit recommended By Law changes. The By Laws chairman shall write and submit an agenda of proposed By Law changes or additions to the Board of Directors in accordance with Article X. The By Laws chairman will be responsible to ensure that newly approved changes and deletions in the FCSA By Laws are submitted to the Secretary/Treasurer of the FCSA for him to maintain at the FCSA headquarters immediately after the annual membership meeting.


6. The FCSA Membership Chairman will be the person of contact for expanding the membership of FCSA. It will be the duty of the Membership chairman to attract new members into the FCSA in a manner approved by the Executive Board.


1. Proposed changes to these By Laws may be submitted by any member or associate member of FCSA. All proposed By Law changes must be submitted to the FCSA By Laws Chairman or a member of the Board of Directors prior to April 1st of the year in which the change will be considered at the annual membership meeting.


2. Any member of the Board of Directors who receives a recommendation for a By Laws change shall submit the proposed By Law change to the FCSA By Laws Chairman.


Any member of the Board of Directors, who receives a recommendation for a change to the rules of competition, shall submit the proposed rules change to the FCSA Competition Rules Chairman.


4. Amendments or suspensions to the FCSA Match Rules or FCSA By Laws require a two thirds (2/3) vote of the voting membership present at the annual membership meeting for passage. Only current or past FCSA match competitors are allowed to vote on amendments, changes or suspensions to the FCSA Match Rules of Shooting Competition. A match competitor is a current member of FCSA and who has competed in or is currently competing in a sanctioned FCSA shooting competition.


6. Robert's Rules of Order, newly revised, shall govern in all cases not consistent with these By Laws.
As amended by the membership at the annual membership meeting at Raton, NM on 7 July 2006.

Please note: because of the possibility of human error in this publication, we ask that all mistakes that are found be brought to the attention of the President or Secretary/Treasurer of FCSA.